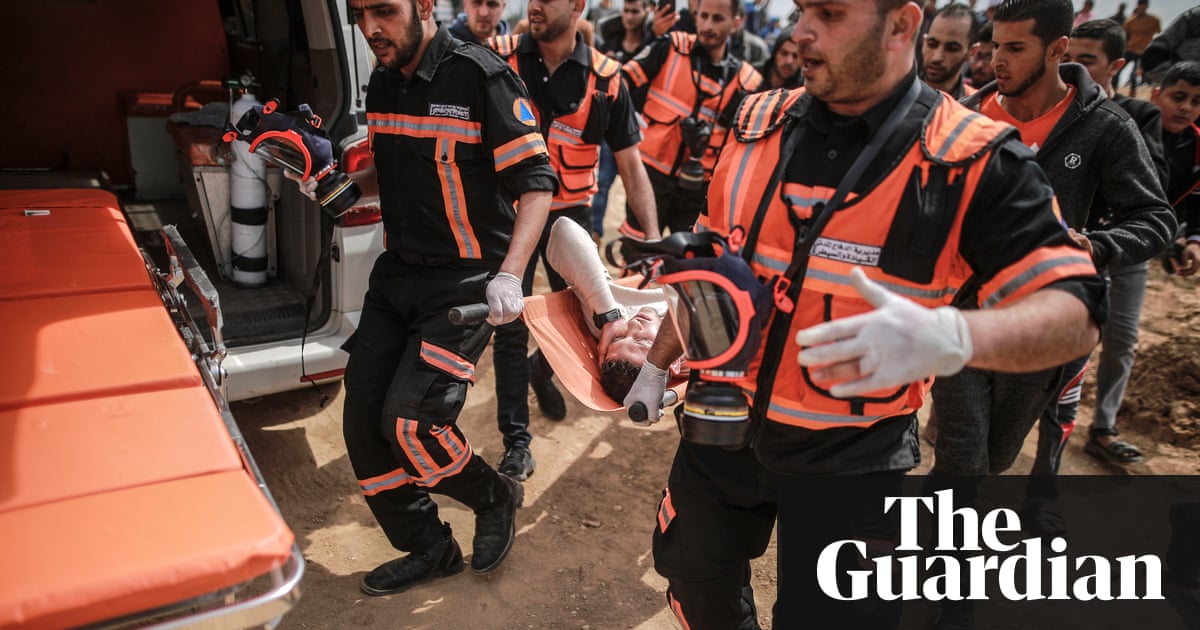 Gaza hospitals, running low on blood and overstretched by the huge number of wounded, were reeling after one of the enclaves bloodiest days outside of open war, in which Israeli soldiers shot 773 people with live ammunition, according to the ministry of health.

Fifteen of the wounded died, said the ministry spokesperson Dr Ashraf al-Qidra. Most of the dead were aged between 17 and 35 years old, he said. The injuries were on the upper part of the body. He added that the remainder of the wounded, some of whom were in a critical condition, had been shot with live ammunition.

The violence erupted on Friday after mass demonstrations took place demanding the right of return for Palestinian refugees and their descendants to land in Israel.

Tens of thousands of people, including women and children, had planned to camp several hundred metres from the Israeli frontier, which surrounds the 140-square-mile Gaza strip on two sides, on the first day of a peaceful, six-week protest.

But from the main camps, groups of mostly young men approached the border at several locations and started throwing stones and burning tyres. Soldiers responded by opening fire throughout the day.

More than 1,400 people were wounded, mostly by bullets but also rubber-coated rounds and tear-gas inhalation, the health ministry said. The Guardian was unable to independently verify the ministrys figures.

On Friday, in less than 30 minutes, reporters saw 10 people with bullet wounds carried away on stretchers at one of the demonstrations.

Israel said it has positioned snipers and responded to rioting Palestinians with dispersal means and firing towards main instigators. It said the movement was a Hamas-orchestrated ploy and it was identifying terror attacks under the camouflage of riots.

The military pointed to what it said was an attempted shooting attack by a terror cell in the northern part of the Gaza strip on Friday. It added that it had responded with gunfire and by targeting three nearby Hamas sites with tanks and fighter jets. The military sent a video to journalists showing men appearing to tamper with the separation fence and said that Hamas had earlier sent a seven-year-old girl across the border, whom Israeli soldiers returned to her parents.

The Israeli ambassador to the UN, Danny Danon, said: The international community must not be deceived by what he called a well-organised and violent terror gathering.

Hamas, which backed the protest, has fought three wars with Israel since 2008. In the past few weeks, Israeli forces say they have caught people attempting to cut through the frontier to launch attacks.

The UN security council held emergency talks to discuss the risks of further escalation but failed to agree on a statement. There is fear that the situation might deteriorate in the coming days, said the assistant UN secretary general for political affairs, Tay-Brook Zerihoun.

The UN secretary general, Antnio Guterres, has called for an independent and transparent investigation into the violence, according to his spokesman Farhan Haq.

The Palestinian ambassador to the UN, Riyad Mansour, said what happened in Gaza was a heinous massacre. He said Palestinians expect the security council to shoulder its responsibility and defuse this volatile situation, which clearly constitutes a threat to international peace and security.

Fridays death toll stood at 16 and included a farmer killed by an Israeli tank shell before dawn as he picked parsley near the border, according to the health ministry. An Israeli army spokesman said the man was operating suspiciously.